CBT has been shown to help people cope with:

CBT is usually done in partnership with the service user and a CBT therapist (often a psychologist, social worker, psychiatrist or mental health nurse who has undergone specialist training).

The British Association of Behavioural and Cognitive Psychotherapy have useful leaflets which are free to download which will give you more information about CBT.

1. It is short term compared to other types of intensive therapy
Typically people have it over 6-12 months

2. It is usually done on a one to one basis
Although, sometimes it’s done in groups or with families

3. It doesn’t help everyone
Not everyone will respond to CBT and it won’t necessarily change people’s psychosis / prevent future mood episodes

4. It sometimes helps people to cope better or feel less distressed
It might help people to feel less depressed or anxious about their situation

5. It is personalised to suit the individual
Individual goals are decided on between the therapist and service user

7. It is confidential
Therapists agree to keep things confidential unless the service user discloses that they want to share information with others, or if the therapist thinks they are at risk

8. It breaks problems down into three areas: the way the problem affects our feelings, our thoughts and our behaviour
The therapist helps the individual to come up with ways of overcoming problematic thoughts, feelings or behaviours

9. There aren’t any known negative side effects
Though it does require time and commitment

10. People are taught to act as their own therapist
Over time people learn to change their thinking patterns and modify their behaviours in ways that improve their wellbeing. This can take time and lots of practice 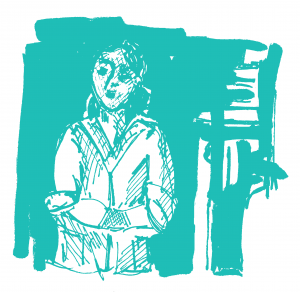 Peter had been hearing voices for nearly 2 years when we met. The voices were very distressing because they told Peter that people in his family and his close friends hated him and were trying to hurt him. Peter had tried ignoring the voices but found this very difficult and instead he withdrew from his friends and family.

In CBT Peter was able to talk to me about his voices and about his relationships with his friends and family. Although he didn’t believe that people were trying to hurt him, he did sometimes worry that people didn’t like him. Peter told me this feeling had begun when he was at school where he had been badly bullied.

We worked together on helping Peter build a more positive picture of himself by looking at all the positive things he had achieved in his life. Peter learnt to test out what his friends and family really thought about him by asking them directly rather than jumping to conclusions based on his worries. This made him feel more confident and he was able to challenge the negative things the voices said. Over time he found that the voices were easier to dismiss and became less frequent.

How do you get CBT?

In some mental health teams there are specialist therapists who can offer CBT. Your relative’s Care Coordinator /GP can make a referral. Sometimes there are waiting lists for this.

If you cannot get a referral for CBT through the NHS, you could consider paying to see a therapist privately. The BABCP website has information about finding a therapist.

There are also many helpful self help books and websites which offer step by step CBT guides to overcome many problems. These are listed in the Resource Directory.

Samaritans provides confidential non-judgemental emotional support, 24 hours a day for people who are experiencing feelings of distress or despair, including those which could lead to suicide. It has branches across the UK supporting people face to face, by telephone, email and letter.

Young Minds is a national UK charity committed to improving the mental health and emotional well-being of all children and young people and empowering their parents and relatives. They have a specific section of their website for parents and a dedicated helpline for parents.

Rethink is a national mental health charity supporting everyone affected by severe mental illness to recover a better quality of life. They provide services (including respite breaks for relatives and support workers), have a network of over 150 local support groups many run by relatives and run campaigns. The Rethink website has useful information for relatives, including sibling relatives. A good starting place is the ‘how can we help section’

You can find out about local groups through the Rethink website home page.

The Hearing Voices Network offers information and support to people who hear voices and those who support them. They have a network of over 180 groups throughout the UK and through their website you can find details of your nearest support group.

Chill4us Carers is a social network community for carers and provides information, the ability to chat with other carers. They are a peer support group offering carer resources and have experience of the isolation felt by family carers, the struggle with finding grants, money and the general difficulty of finding help for carers.

Carers UK is the voice of carers. Most of their resources are generic e.g. guide to direct payments, work and caring. They have a number of discussion forums including one for mental ill health and up to date policy and campaign information on issues affecting relatives.

The Carers Trust is one the largest providers of comprehensive relatives support services in the UK. Through its unique network of 144 independently managed Carers’ Centres, 85 young relatives services and interactive websites including discussion boards. There is useful mental health specific information on the site – use their ‘Help for carers’ search facility typing in ‘mental health’ to help you navigate.

The Carers Federation was established in 1992 and is a small local organisation supporting relatives in the North of England.

Bipolar UK is a national user-led organisation and registered charity for people whose lives are affected by bipolar disorder with branches in England and Wales. There is specific information for relatives on the site, use their search facility typing in ‘carer’ to help you navigate. They also have a network of self-help groups and an e-community online discussion resource.

Making Space provides a range of services for relatives including respite breaks and support. They operate in the North West, Central England and London/South East of England

Mind is a national mental health charity that provides information and support for people affected by mental health difficulties. The website provides a great deal of useful information about mental health and the support available to people experiencing mental distress and their families. A useful starting point is the ‘how can we help section’ to find contact details for their legal service, information line, publications, information leaflets. The local mind organisations located across England also provide specific services to relatives – contact your local branch to find out more:

Sane campaigns to raise awareness, undertakes research and provides help and information to those experiencing mental health problems, their families and relatives. A key point of contact and support is the helpline: 03003047000

Part of the Department for Work and Pensions, JobCentre Plus provides information on most benefits for people of working age and information on employment and schemes for getting into work.

The National Institute for Health and Clinical Effectiveness (NICE) has made some recommendations about the treatments you and your relative should be offered. These are based on a careful review of all the available evidence by a panel of clinical experts, service users and relatives.

Information on help for relatives, including benefits, work issues and your rights as a relative.

The official UK government website for citizens, including information about disability rights and support in the UK

The Department for Work and Pensions

The Department of Health

Information about the Care Quality Commission and the Mental Health Act.

Includes extensive information on mental health conditions and treatments. It is an American site so some details may be different to the UK.

The DBSA is a leading American peer-directed organisation which focuses on depression and bipolar disorder and provides resources and empowering services.

The site has a range of information about psychosis including a report called: ‘Women and Psychosis: A guide for women and their families’.

The organisation actively promotes user empowerment and user involvement in the choosing, monitoring and running of mental health services.

Provides services for people with complex needs, including those affected by drug and alcohol misuse and mental illness.

Together: Working for Wellbeing

Together’s focus is to support people who have complex and enduring mental health issues, most of whom are referred to our services by other professionals.

complaints procedure and how to get independent help if you decide you may want to make a complaint, and inform you about how you can get more involved in your own healthcare and the NHS locally. Your local NHS Trust will have its own PALS service.

The Royal College of Psychiatrists is the professional and educational body for psychiatrists in the United Kingdom and the Republic of Ireland. They produce a range of information leaflets that can be downloaded from their website such as debt, carers, schizophrenia, spirituality and mental health as well as podcasts. They ran a campaign a few years ago with the Princess Royal Trust for Carers producing specific information for relatives about information sharing and patient confidentiality.

The NHS Choices website offers in-depth information about psychosis and bipolar disorder, including symptoms, causes, diagnosis, useful questions you may want to ask of mental health professionals with answers. There are also ‘real stories’ on-line.

The Mental Health Foundation provides information, carries out research, campaigns and works to improve the services for anyone affected by mental health problems, whatever their age and wherever they live. The interactive website has bulletin boards and forums, publications and information.

The McPin Foundation aims to transform mental health research by putting the lived experience of people affected by mental health problems at the heart of research methods and the research agenda.

Provides information on mental health as well as information on research projects at the institute. It has developed a specific web resource for relatives where summaries of published research are held, interviews with professionals and relatives can be found and links to other resources sign posted.

Provides literature reviews of health related research including reviews into studies of schizophrenia. A project to produce lay summaries of all the schizophrenia studies is underway. They are also found on this site.

Specializes in providing community based mental health assistance and support to the ever growing Chinese community in the United Kingdom.

The Centre for Mental Health carries out research, policy work and analysis to improve practice and influence policy in mental health as well as public services. Their priorities are mental health care in the criminal justice system and employment and mental health. They publish reports on-line including information on recovery

The BPS are the representative body for psychology and psychologists in the UK. It has a publications section on its website including links to all the NICE (National Institute for Health and Clinical Excellence) guidelines that define best practice treatments and supports for mental health services users and their families.